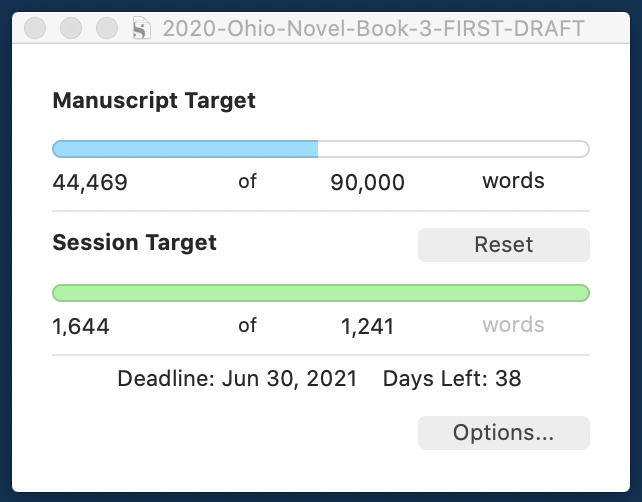 But before I get to that, I’m going to note that I’m 531 words away from hitting the NOVEL mid-point and the SERIES midpoint.

With that said, here is where I am right now.

I was tempted to run even longer than I did, but I left myself at an absolutely perfect spot to pick this up tomorrow, and here’s why.

When I stopped writing this morning:

My main character is about to step into terrible danger to save someone important to her.

She is weaponless, helpless, and going into a situation in which the person she is trying to save is going to be fighting her (for a good, but also for a terrible, reason). Any mistake she makes will kill both of them, and everything she MUST do runs counter to everything she has ever learned about what she should do in situations like this.

Which is to say, it’s the main character in a bad situation that has suddenly become so much worse than anticipated, or planned for — where she cannot do anything she knows how to do well, where everything she wants to do is prohibited, where any mistake she makes will get her and everyone she cares about killed…

And where doing nothing will have the exact same ending as doing the wrong something.

So she’s going to do something she’s never done, and is pretty sure she can’t do, knowing any mistake will be fatal…

And she’s going to see how THAT works out.

The thing is, today I wasn’t writing the scene I planned.

But because of my process, I didn’t have to, because even as I was writing against my outline, I planned toward being where I needed to be today to get this.

Line-for-scene outlining combined with a workable novel structure — they work overall even when little pieces blow up and crash and burn.

And everything I’d planned for this point wasn’t good enough.

But what my gut / Muse / left-brain Editor – right-brain Muse pitched at me in my 30-word replacement sentence this morning was.

I had an exciting few hours of writing, and I cannot wait to see what happens tomorrow. 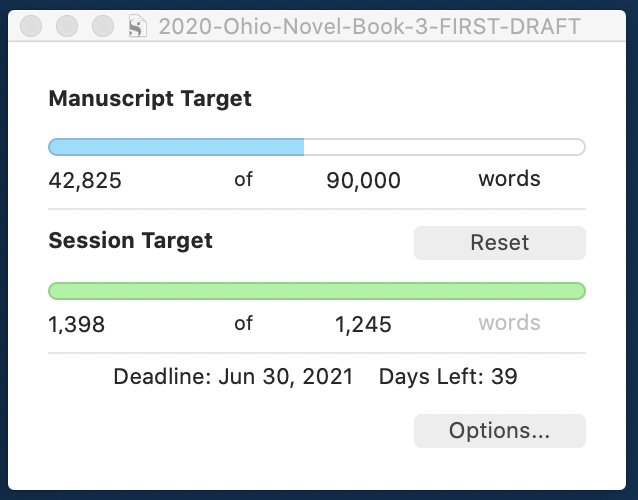 Oh, MAN. Today’s scene was fun, and I’m only halfway through it. It was hard, hard, painfully hard to stop…

But I’ve left myself in a great place to pick up on Monday. AND… for what it’s worth, I’ll hit 45,000 words and the half-way mark on the novel AND the five-book series next week.

As tempted as I was to keep writing, thinking that I could do that today if I wanted to… I’ve learned the hard way that the trick to being consistent on your writing is to know when to stop, and not just keep pushing past your objective.

When you do that, you start writing to failure.

WRITING TO FAILURE means that you keep expanding your word counts every day, pushing yourself harder and harder to do more than you did the day before, until you break. This is a self-inflicted form of writer’s block.

It’s mean, and I’ve done it before (a couple different times with commercial deadlines, in fact).

When you break, the words dry up, and you sit there staring at the screen, and you discover that by constantly punishing your creative brain, it has locked you out. Writing to failure is a great way to never finish the story, or the book… and a superb way to kill a writing career.

In any case, today I stopped when I ran a few words past my goal, and while it was fun, and while I’m excited to find out what happens on Monday when I come back to it.

While I was writing the scene today, a minor character from a previous book appeared suddenly, volunteering something that’s inside a big box he brought with him, because my MC helped him once — and because he liked the little personal gift my main character gave him when she did it.

And she has not opened his gift yet, so I don’t know what’s in it.

That’s cool. I’ll get to find out on Monday.

Now on to all the other stuff on the Friday list.

Have a wonderful weekend, and see you again next week. 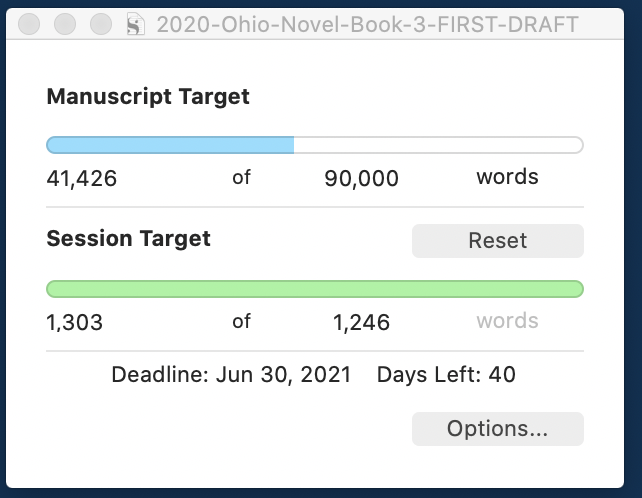 Just a note that the words today did not come easy, that added that I started out by creating negative numbers by debugging a redundant chunk of yesterday’s scene, and that in spite of that, I did hit my goal.

My MC is in big, big trouble.

But now I have to go do all the other stuff on my list.

Today went better. Coffee was involved (for my characters) and 1482 words just flowed.

Holly Lisle Holly Published: May 5, 2021 0 comments
Categories: Books, Fiction, How To Revise Your Novel, How To Think Sideways, How to Write a Novel, How To Write A Series, Ko-Fi, My Books, Novels, Ohio, Ohio Series, Readers, Series Fiction, The Ohio Novels, The Ohio Series, URBAN FANTASY, Write A Book With Me, Writers, writing as a business, WRITING CLASSES, Writing Fiction, Writing Life, Writing Neep 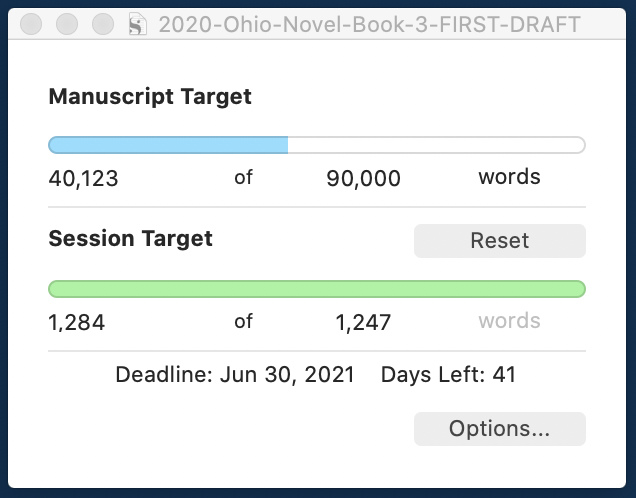 Better yet, I got to include my favorite local restaurant, and a local (fictional) band, and the first meeting between my MC and a character who’s been dancing around the periphery of the story for two and a half novels.

Meanwhile, I had fun, my characters had fun, there was scary business, there was some sleight of hand — and you just can’t ask for a better writing day than this one.

So I won’t. I’ll just appreciate that today was a helluva lot more fun than yesterday, and will roll with tomorrow as it comes.

Brutal writing day. NET GAIN of 769 words, but to even get into a positive word count was a damn battle 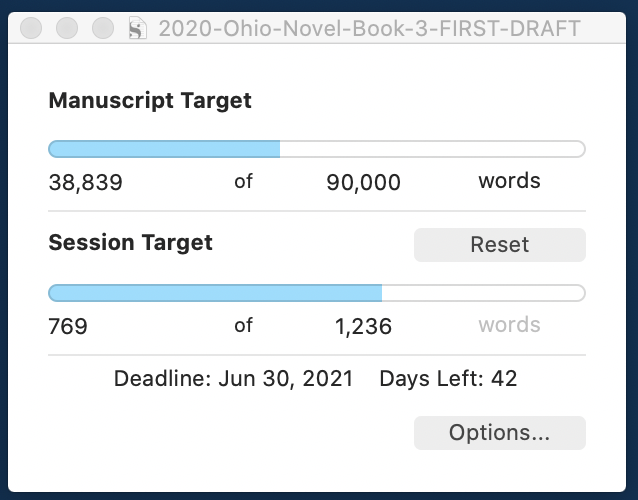 Okay. I knew the fight scene was going to get messy.

I knew getting my MC home was going to be tricky.

Some of what I wrote yesterday was really good, and it put my character in exactly the right sort of danger.

Some of it wandered off into the weeds and got lost, and meandered around — and I had to burn down the weeds, cut the head off the meandering, and wipe up the mess afterwards.

Which is actually pretty much what’s now in the chapter. Chapter 11, FWIW.

I just ran out of time with fewer words than I would have liked to have.

Still, I can take the fixed, much better scene with me into tomorrow, and maybe make up some of the wordcount I fell behind on today.

Way more than three hours on this today, though.

The discovery of a beloved grandmother’s legacy 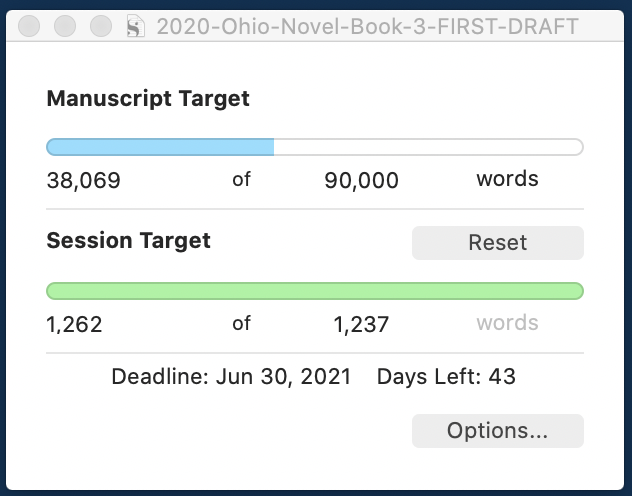 I was not expecting what happened to day. It wasn’t the sentence for this chapter in my life-for-scene outline — I had to write a new LFS sentence just to make sure it wouldn’t break the book when I started writing. But reworking the outline was definitely the right thing.

Along with meeting someone whose going to become increasingly important as the series goes on, my main character discovered that she only ever knew a very small part of who her grandmother had been.

Today, she discovered that one of the secrets hidden in the house she inherited had been sitting out in plain sight since she was a little kid…

And it’s still sitting there, waiting exactly where she left it.

And she’s now finished meeting the guy I’ve been waiting to introduce to her for two-and-a-half books.

Their meeting didn’t go at all the way I expected. 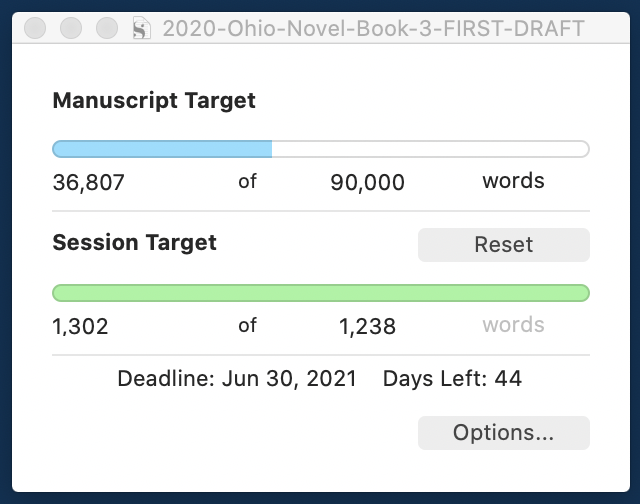 Great writing day, my MC and the character who has been hidden inside the story until now finally get to meet…

And it all worked.

I miss being able to do snippets, because I would have had a great one for today — but I have to keep the pseudonym separate from me until the books have a chance to find an audience in the Urban Fantasy / Fantasy readership.

A meal, a band, and a song about a guy who rescued a girl long ago and far away… 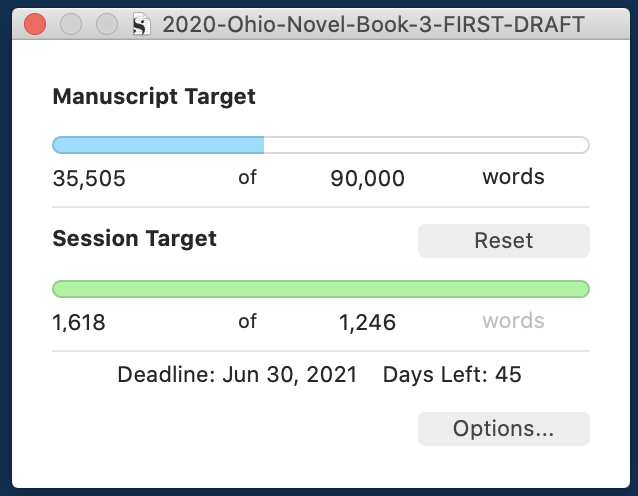 Today went well. 1,618 words for the day (which was a nice chunk over my objective)… and 35,505 for the book, so well past the first third… But much better than that, they went funnily, and passionately, and a bunch of pieces from the first two books and bits of this one came together in this one scene.

I accomplished my main objective with the scene, got to put in some song lyrics from the song I wrote about one of my main characters in Book 2, and got to write the live band who performed and let the reader see for the first time a character that I’ve been writing but keeping in the background in both Book One and Book Two.

I have not yet identified that character to the reader. But I know who it is.

This was a big day, because it held the workings of a critical plot point for the overall five-book series.

And it flew, did what it was supposed to do, and while I was writing it, made me believe.

And made me cry. Just a little. 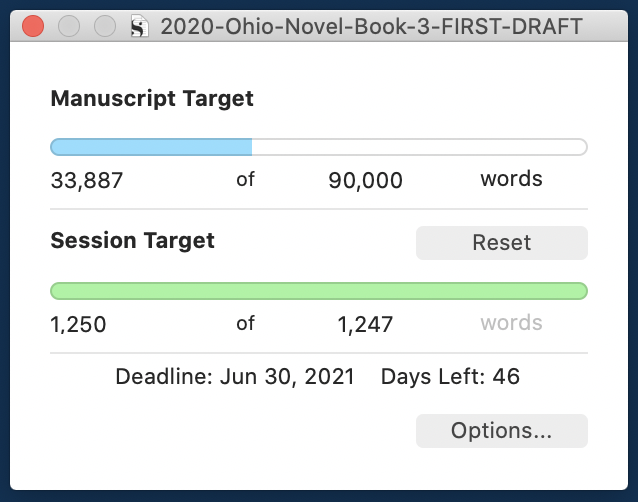 You’re writing along, and the story is going just the way you planned, and then out of nowhere (in your plans) guys appear in your main character’s basement with spiffy, shiny gadgets with buttons and sliders and knobs…

And the gadgets have their own legs, so that they can walk around, and eyes… and the eyes blink while watching you.

It was a “Toto, I’ve a feeling we’re not in Kansas anymore” moment.

And an excellent writing morning.

Exactly 1250 words, which is the daily goal, a scene I just LOVE, and a set-up that should make it pretty easy for me to jump back in tomorrow. 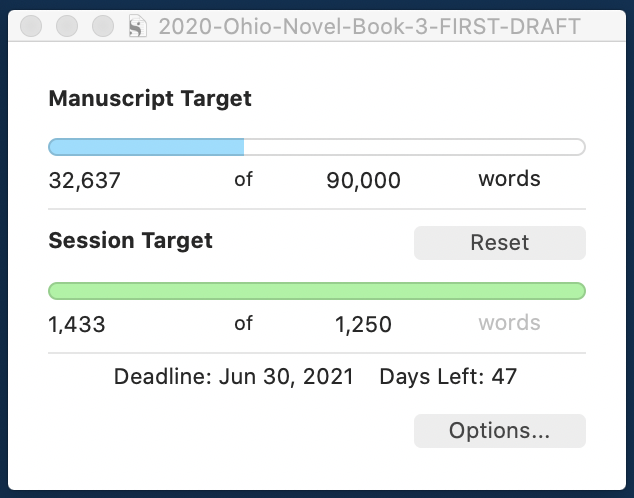 I’ve been up and writing since well before seven AM, and today I left myself in a great position to pick up tomorrow right where I left off.

Today’s piece of the story unfolded nicely for me, the coming danger and adventure are closing in, and my MC is finally going to meet someone who’s been important in her life since she arrived in town — only from shadows and corners.

She’s not going to realize the two separate people are in fact just one person for a while yet, but I know it, and I’ve been waiting to write tomorrow’s scene since I realized it had to happen (BUT NOT YET) waaaay back in Book One.

I also had time to do some worldbuilding in my background document (uncounted words), to write out details about a couple of folks that I just discovered this morning, and to fix some early worldbuilding that has gotten better over time, but that I’d forgotten to document.

This is the kind of writing day I love, and I’m so glad I woke up early and couldn’t get back to sleep.

But now, on to the rest of the day’s work. I head off, already excited about getting back into this tomorrow.